Stay up-to-date on this NICB region

Sign up for periodic news and event email updates. 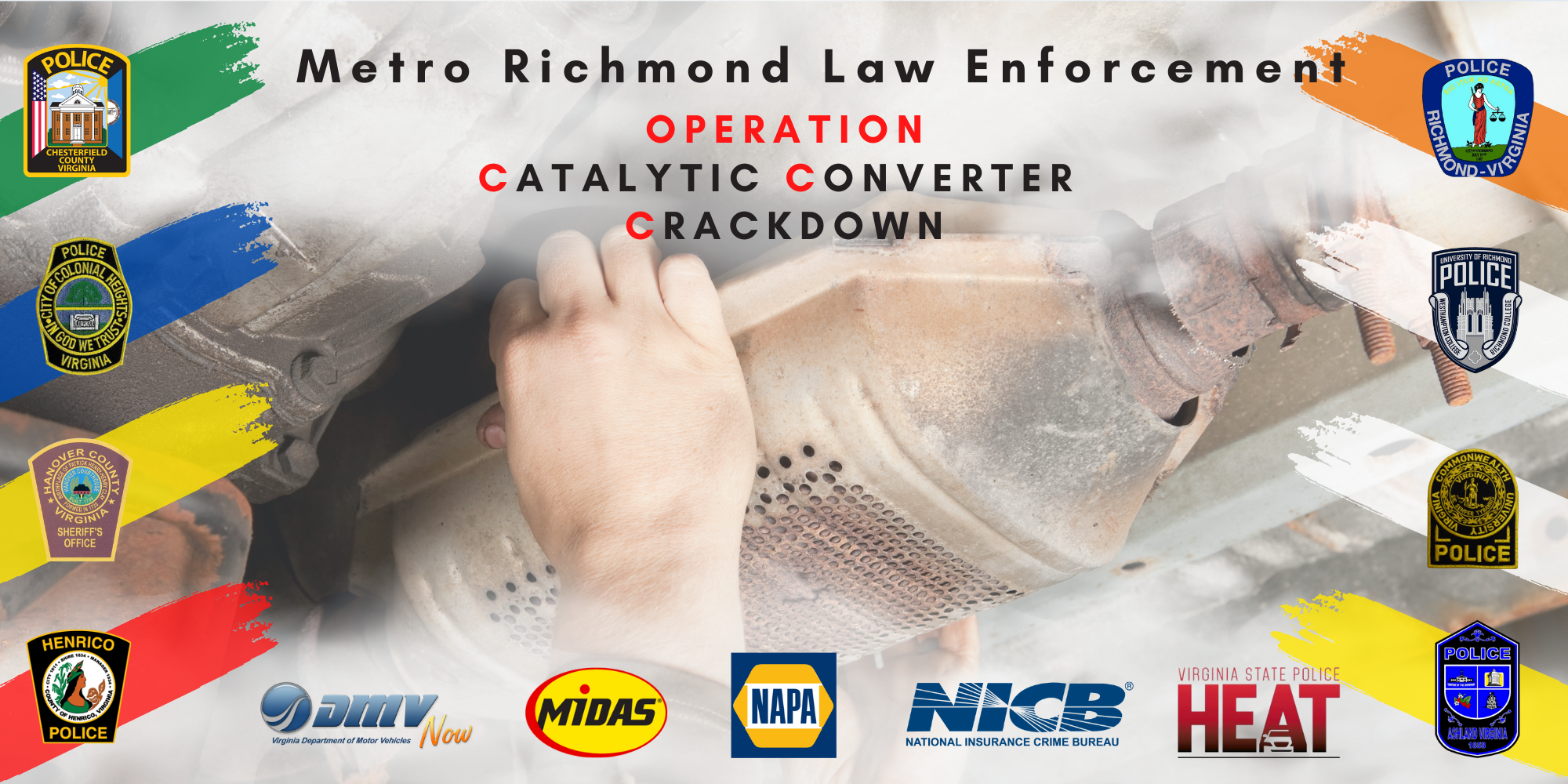 The law enforcement agencies hosting the regional effort include:

Residents within the region have the opportunity to have their catalytic converters spray-painted and marked for free, at one of five Midas locations on Nov. 13, Dec. 11 and Jan. 8, 2023. The free painting will be hosted by law enforcement agencies at participating Midas locations between the hours of 10 a.m. and 2 p.m. Registration is required to have your catalytic converter marked and is now open https://converter.midasofrichmond.com. Reserve your time slot and choose from various locations in Richmond, Henrico, Chesterfield and Colonial Heights.

"We believe we'll see a reduction in thefts by adding a level of deterrence," said Commander Faith Flippo, Richmond Police Department. "The idea of adding these markings is to quickly identify converters that may have been stolen. Then, if the converter is taken to a metal yard or the culprit is stopped by police in any surrounding jurisdiction- we literally may catch thieves ‘red-handed.’"

As catalytic converter theft is on the rise nationwide, Virginia ranks twenty third in the country with 917 thefts in 2021. Thefts have increased because the car parts contain precious metals that have skyrocketed in value in recent years. Replacing a catalytic converter can cost between $945 and $2,500.

“This type of crime can create a financial dent in our community members’ wallets,” said Officer Doug Smart, Henrico County Police Division. “We urge all community members to take active steps to avoid becoming a victim.”

Catalytic converters are part of a car’s exhaust system and convert toxic gases into less dangerous gases. Unfortunately, vehicles with missing converters often pollute more and have excessively loud engine noise, which worsens when drivers speed up. A quick stop to a Midas in the Richmond area to have your cat converter painted with high-heat automotive paint could help save you thousands in repair costs.

Other ways to protect your vehicle include:

• Park in a garage or secured parking area;

• Fleet vehicles and minimally used vehicles should be parked in a secured and well-lit area.

The information contained herein is general in nature. If you are an NICB member or law enforcement and interested in more detailed information, please reach out to the appropriate person identified by the Region. Due to the sensitive nature of our investigations, we will not disclose additional details to the general public.

Please be reminded that individuals, charged with a crime, arrested, or indicted should be presumed innocent unless and until proven guilty.