Warning: Damaged Vehicles from Recent Storms May Appear for Resale

DES PLAINES, Ill., Sept. 26, 2019 — Hurricane Dorian and Tropical Storm Imelda have flooded vast swaths of the East Coast and Texas and as the water recedes, thousands of damaged and flooded vehicles are emerging presenting the potential for fraudsters to prey on innocent used car buyers. In Southeast Texas alone, more than 17,000 vehicle flood claims have been reported, according to the Insurance Council of Texas. NICB is encouraging consumers to do their homework before purchasing a used car. 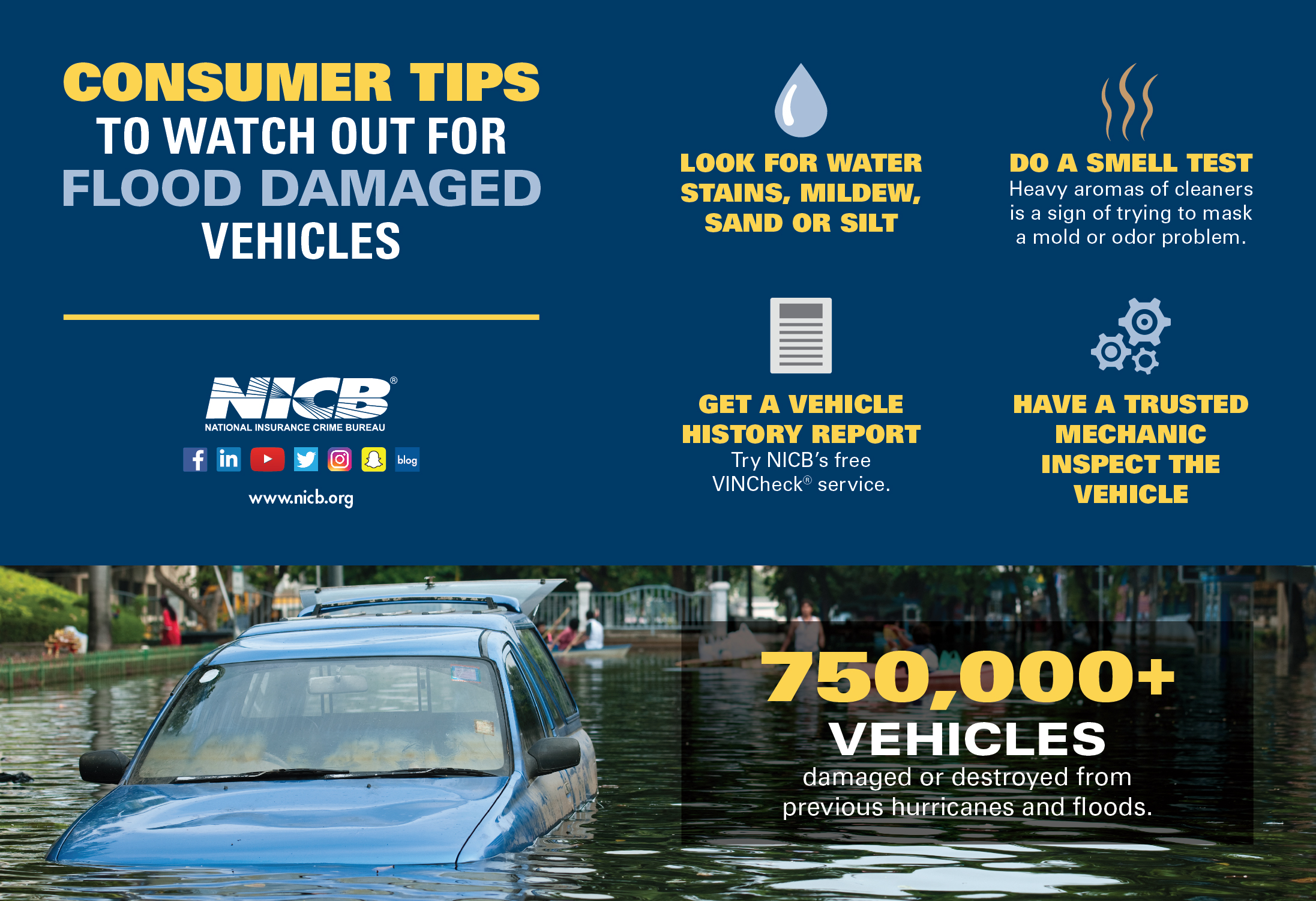 Purchasing a car is a major financial investment. Among the many precautions a consumer should take is arming themselves with accurate information about certain aspects of the history of the car. To that end, the National Insurance Crime Bureau (NICB) offers a free tool called VINCheck that allows consumers to check a vehicle for “red flags”.

“Following any major hurricane or storm we unfortunately see fraudsters try and scam consumers by selling cars that have been impacted by flooding, and this tool is a clear and easy way to protect consumers and one of the most utilized resources on our website,” added Kelley.

“Testimonials from users demonstrate that VINCheck remains one of the industry’s best methods of providing public safety and consumer protection. The information helps to prevent innocent people from being victimized through the purchase of damaged and potentially deadly used vehicles.”

VINCheck History:
After making initial landfall in south Florida on August 25, 2005, Hurricane Katrina crossed the Gulf of Mexico becoming a Category 5 as it approached and made landfall as a Category 3 near New Orleans on August 29.

Even before floodwaters began to recede, NICB personnel were dispatched to the area to assist state and local law enforcement and insurance claims professionals. Immediately, they recognized the downrange threat posed to innocent consumers by the enormous number of flood vehicles that Katrina dumped all over the city. NICB agents knew that hundreds of these vehicles would reenter the commerce stream presented as perfectly fine used vehicles when, in fact, they could potentially become rolling caskets for any unsuspecting buyer.

It was a race against time to identify and catalog as many of these abandoned vehicles as possible before they were dragged off by rogue tow operators to unknown locations where cosmetic surgery would render them attractive, affordable vehicles priced well below market value.

With estimates ranging from 300,000 to 500,000 damaged vehicles, NICB created an online tool to access all the vehicle identification numbers (VIN) of damaged vehicles, resulting from claims data provided electronically by NICB member insurance companies. The challenge was to enable the general public to access the data while protecting each insurance company’s proprietary information.

After securing member-company authorization and support for the idea, NICB launched its “Flood Vehicle Database” on October 17, 2005. Now anyone anywhere could query a VIN—free of charge—to see if it had been damaged from Hurricane Katrina before they handed over any money.

The Flood Vehicle Database has been enhanced and expanded twice since its creation. In November 2007, the name changed to VINCheck with the addition of total loss and salvage records. It received its next and current enhancement in June of 2008, when it would also provided access to unrecovered insured stolen vehicles.

The VINCheck service was unprecedented and it soon proved to be the most popular feature on NICB’s website—a claim it continues to hold with more than 2.5 million page views since July 1, 2018. There have been more than 1.1 million VINCheck queries since October 1, 2018.

The lessons learned and services developed in response to Hurricane Katrina were applied with seamless integration when Hurricane Harvey, slammed into Texas in 2017 destroying even more vehicles than Katrina. VINCheck handled the crush of inquiries without fail.

As a means for consumers to report their success with VINCheck, NICB added a place for users to describe their successes—and many users have done so—validating both the need and the protection conceived almost 14 years ago with the original Flood Vehicle Database.

Not all of NICB members participate in VINCheck. For a list of those that do, visit:
https://www.nicb.org/vincheck/participating-members.

Here are just a few of those success stories from actual VINCheck users:

“VIN was missing from window, owner stated car had never been in any collisions but needed the side to be repainted because it had a few scratches. I had told them I need a reliable car because I travel far every day for work and get out late at night. I asked them multiple times about the history of the car and they stated that the car had never had an accident at all! I noticed some things in the car didn't quite fit into place and I'm so happy I found out about NICB!! I would have been stuck with a bad car to use for school and work.”
--O.C., Gaithersburg, MD

“I have bought used vehicles in the past and always check the vin# and have them inspected. This is the second vin# from this dealer to come back as totaled.”
--J.R., Carver MN

“We were looking at purchasing a car which the owners said had never been in an accident. VINCheck came back with a salvaged title, due to collision. We will NOT be buying that car!!”
--N.V., Tucson, AZ

VINCheck information is made possible through the cooperation of participating NICB member companies and is available, free of charge, as a public service to consumers. VINCheck is provided pursuant to NICB’s Terms of Service. The data contained in the VINCheck database is provided AS IS. NICB does not independently verify the information contained in the VINCheck database and NICB expressly disclaims all warranties related to the information, including merchantability and fitness for a particular purpose.  The VINCheck database contains only those salvage, stolen vehicle or total loss records made available by participating member companies. The end user should independently verify the accuracy of any information obtained through VINCheck before taking any action.