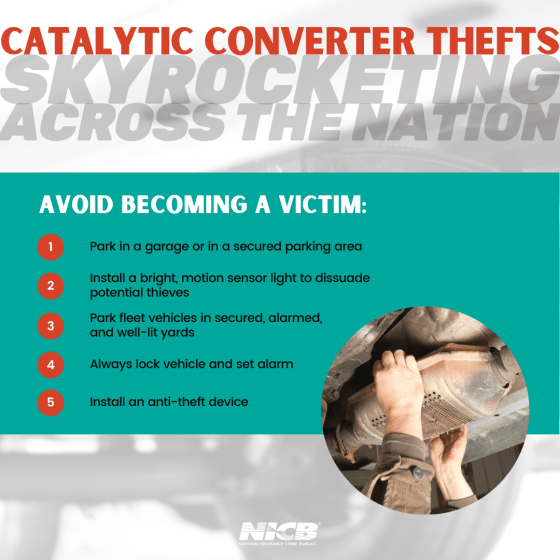 “Since the start of the pandemic, we have seen a drastic increase in auto crimes to include a rise in catalytic converter thefts, and Illinois continues to be near the top of the list,” said David Glawe, President and CEO of the NICB.

A catalytic converter is a device that looks like a small muffler along with the exhaust system. It is designed to convert the environmentally hazardous exhaust emitted by an engine into less harmful gasses. To do this, manufacturers use platinum, palladium, and rhodium. In recent years, the values of these precious metals have skyrocketed.

According to NICB’s Operations, Intelligence and Analytics study of reported thefts, there were 108 catalytic reported converter thefts per month on average in 2018, 282 average monthly thefts reported in 2019, and 1,203 average thefts reported per month in 2020. During this time-period, the top five states for catalytic converter thefts were California, Texas, Minnesota, North Carolina, and Illinois. In 2020, there was a continual climb in thefts. January had the fewest number of reported thefts at 652, but it continued to climb markedly throughout the year, with December having 2,347 reported thefts.

“NICB continues to engage in an aggressive media campaign to warn the public about this alarming trend. Make sure you use common-sense tactics such as securing your vehicle, park in well-lit areas. Make sure your anti-theft device is active. Take your keys and fobs with you. More often than not, people are leaving their keys in their vehicles. Work with law enforcement and your neighbors. If you see something, say something. If you see something suspicious, call 911,” added Glawe.

NICB always encourages you to contact your insurance agent or company to make sure you have the right amount of coverage in case your catalytic converter is stolen. In some cases, this theft is covered by insurance. The optional comprehensive portion of your insurance policy, the portion that covers damage caused to your vehicle not caused by accident, usually covers this kind of loss. However, the owner will be responsible for paying the deductible. If your deductible is $1,000 and the cost to repair the damage costs $1,000 or maybe a few hundred dollars more, drivers may not opt to file a claim. The NICB advises drivers to contact their insurer to report the theft and determine the best course of action.