DES PLAINES, Ill., May 17, 2022 — According to the National Insurance Crime Bureau (NICB), property and casualty insurers paid $4.6 billion to $9.2 billion extra in disaster claims due to insurance fraud in 2021, a cost policyholders bear through their insurance premiums. During NICB’s second annual Contractor Fraud Awareness Week May 23 – 27, NICB will educate on how to identify and avoid unscrupulous contractors.

“Disasters can bring out the best in people as they rush to help those in need. Unfortunately, disasters also attract predatory contractors looking to defraud and deceive disaster victims,” said David Glawe, president and CEO of the NICB. “After most disasters, these shameful contractors use well-rehearsed, predatory practices to exploit stressed disaster victims when they are most vulnerable. As a result, survivors pay these bad actors who do little or no work.”

The NICB estimates disaster fraud adds 5-to-10 percent to the total claims paid following a disaster. Similarly, the Federal Bureau of Investigation found that of the $80 billion in government funding for reconstruction following Hurricane Katrina, insurance fraud may have accounted for $6 billion or about 7.5%. 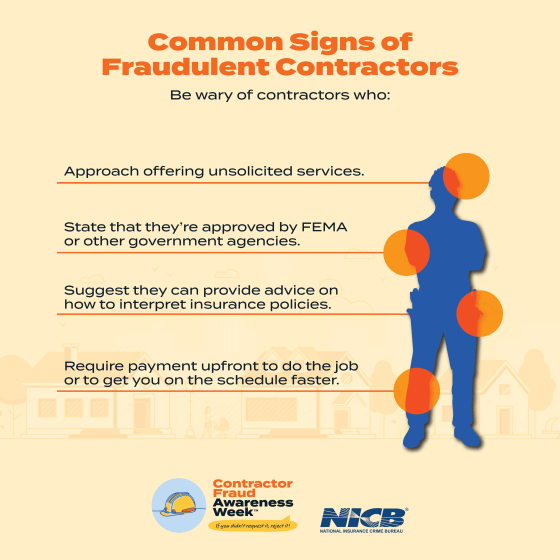 One method to help reduce insurance fraud is through consumer awareness. Consumers and contractors following disasters are inextricably linked. Armed with the understanding of the claims process and contractor hiring, consumers will be able to identify potential fraud, and, in the process, protect themselves and their wallet.

“NICB agents, along with our law enforcement and insurance partners, are on the ground immediately following disasters looking for fraudulent contractors,” added Glawe. “However, we need disaster victims and the general public’s assistance in identifying these unscrupulous players.”

Deceitful contractors – or those passing themselves off as contractors – will try to take advantage of disaster victims. To avoid falling for these practiced schemes, the NICB encourages disaster victims to contact their insurer, law enforcement or NICB investigators should they experience the following:

NICB created Contractor Fraud Awareness Week in 2021 to highlight the growing problem of contractors and vendors that take advantage of disaster victims in the aftermath of catastrophes.