NICB Announces David Glawe as the New President and CEO 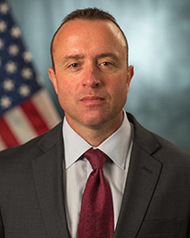 DES PLAINES, Ill., May 11, 2020 — The National Insurance Crime Bureau’s (NICB) board of governors announced that David Glawe has been appointed as the new president and chief executive officer of the Nation’s largest insurance fraud-fighting organization.

Since 2017, Glawe served as Under Secretary and Chief Intelligence Officer at the Department of Homeland Security (DHS) after nomination by the President of the United States and unanimous confirmation by the United States Senate. In that role, he was the senior executive responsible for DHS intelligence functions, bulk data technical solutions, program management, budget, and strategic oversight to integrate 22 DHS component organizations, such as the Cyber Security and Infrastructure Security Agency, the U.S. Coast Guard, Federal Emergency Management Agency, U.S. Customs and Border Protection and the Transportation Security Administration. In addition, he was responsible for the bi-directional sharing of information with the private sector and state and local law enforcement.

“Glawe’s extensive background in national security, law enforcement, and management leadership skills made him the right person to lead NICB. Glawe is a proven leader and who has excelled at strategic leadership and execution and is well-positioned to lead NICB’s continued transformation,” said NICB board chair Mike Capuzzi.

Prior to his appointment, Glawe served as Special Assistant to the President of the United States and Senior Director for Homeland Security at the White House. He also served as the Assistant Commissioner and Chief Intelligence Officer at U.S. Customs and Border Protection (CBP), where he led the development, coordination, and implementation of intelligence capabilities and operations in support of CBP’s mission.

Glawe served in the Office of the Director of National Intelligence as the Deputy National Intelligence Manager for Threat Finance and Transnational Organized Crime overseeing and integrating IC’s collection and analytic efforts. He subsequently served on the President’s National Security Council as the senior intelligence official implementing the President’s strategy on Transnational Organized Crime within the intelligence and law enforcement communities.

Glawe was a Special Agent with the Federal Bureau of Investigation and a Supervisory Special Agent in the Counterterrorism Division. Earlier law enforcement positions include serving as a Federal Agent with the United States Postal Inspection Service and a Police Officer in Houston, Texas, and Aurora, Colorado.

“I’m honored to lead the organization through the next phase of development as we combat insurance fraud and theft and look forward to engaging with all our members, strategic partners, law enforcement, regulators, and consumers,” said David Glawe.

“Glawe has a proven track record of working with the public and law enforcement community at the highest level, and his knowledge and relationships will help position NICB for the future,” added Capuzzi.

Glawe is a graduate of the University of Northern Iowa. He holds a certificate from the Harvard University John F. Kennedy School of Government. His numerous honors include the National Intelligence Superior Service Medal and the Department of Justice Meritorious Public Service Award. He also previously held insurance and security broker licenses.

“My professional career and recent experience leading DHS will help accelerate the important work of NICB as we address insurance fraud and theft during this unprecedented time,” said Glawe.

Glawe is taking over for Joe Wehrle, who has served as president and CEO for the past 12 years and will retire in June. Glawe is available for media interviews regarding his appointment to NICB.

Glawe will officially join the organization on June 1.