The Insurance Industry Leads the Way with Internal Anti-Fraud Controls, But Keep an Eye on High-Risk Departments

Insurance professionals are no strangers to fraud. The idea of consumers committing fraud against insurance companies is a common trope in society, and most companies have dedicated teams to investigate unethical policyholders and false claims. Although fraud committed against insurance companies by outside parties is important, insurance professionals also need to prepare to fight the fraud occurring within their organizations. 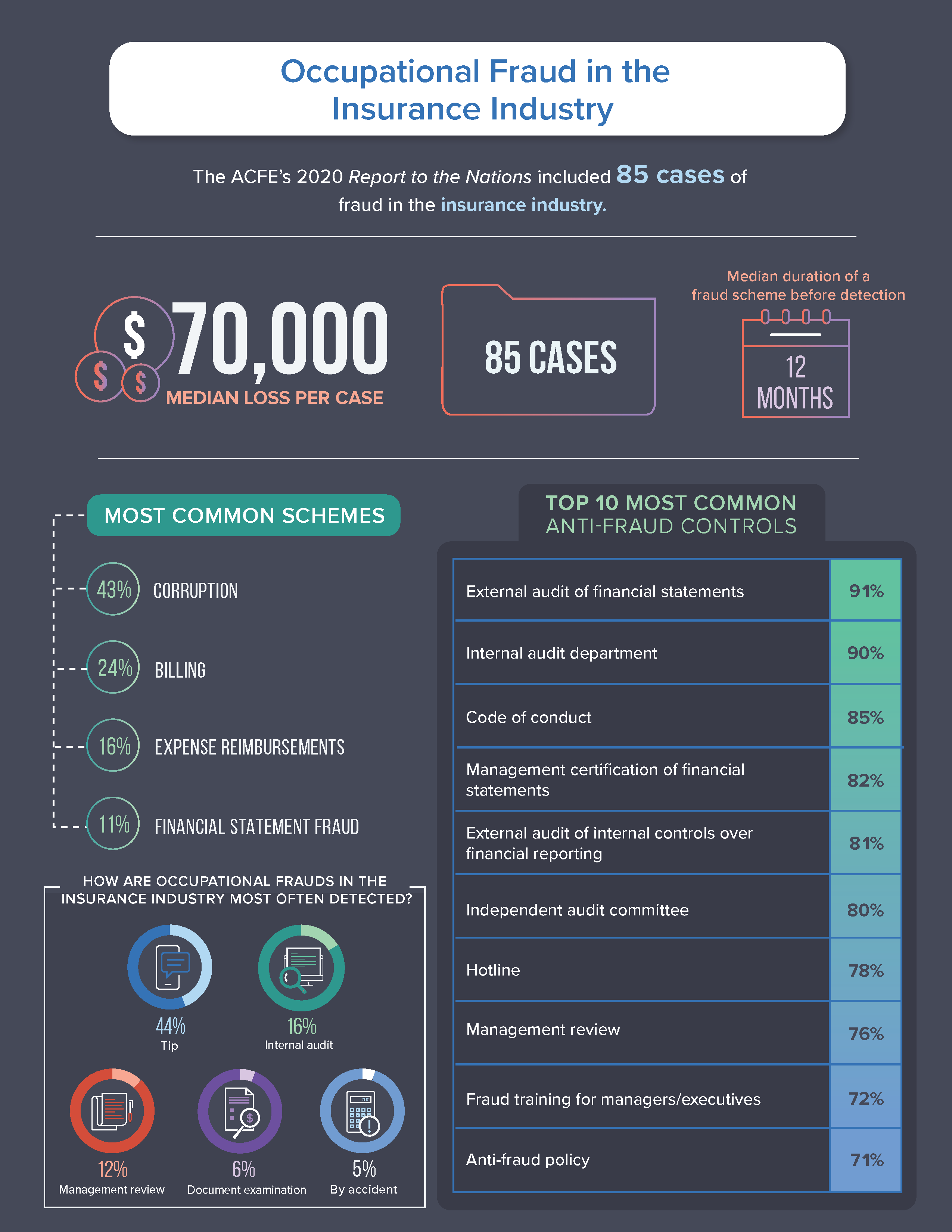 Data in the Association of Certified Fraud Examiner’s 2020 Report to the Nations shows that the typical case of occupational fraud (i.e., fraud committed by employees) in the insurance industry lasted 12 months and caused a median loss of $70,000. Both the duration of the schemes and losses in the insurance industry are lower than the median across industries — 14 months and $125,000, respectively. These lower numbers are good news for the industry and could be attributed to the industry’s robust anti-fraud controls.

The insurance industry has a notably higher adoption of anti-fraud controls than organizations in other industries. Ninety-one percent of insurance companies have their financial statements audited by an external auditor, compared to 83% overall. Similarly, 90% have an internal audit department (compared to 74% overall), 82% require management certification over financial statements (compared to 73% overall) and 80% use an independent audit committee (compared to 62% overall). Another impressive aspect of this industry is that 78% of insurance companies included in the report have an established hotline to report fraud, compared to 64% across all industries. Hotlines are pivotal in combatting fraud since tips are the most common way fraud is detected; 44% of the fraud cases in the insurance industry were detected by tip. Further, organizations that established hotlines experienced fraud losses that were 49% less than those that lacked these initiatives. 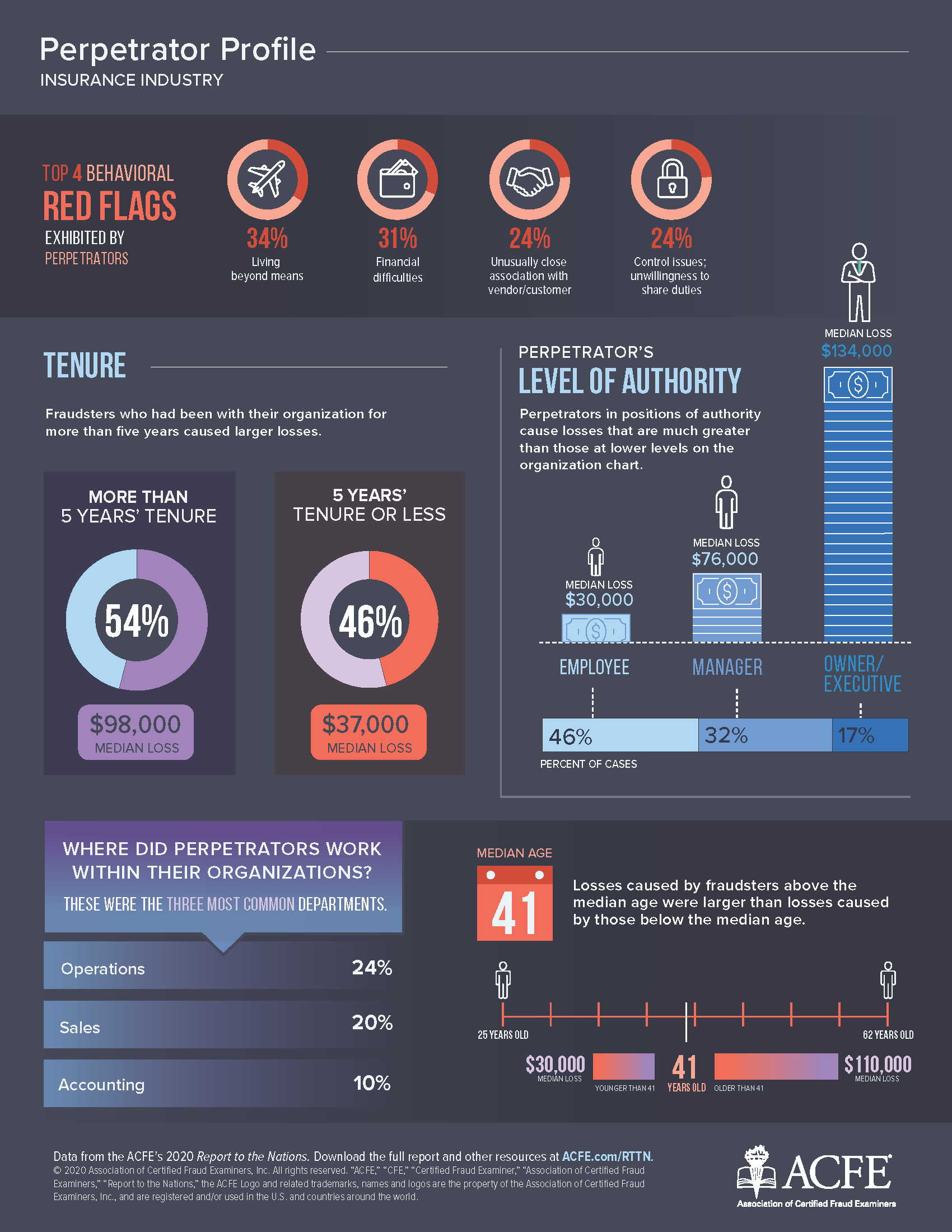 While the insurance industry looks to be ahead of the pack in anti-fraud controls, it also faces unique challenges with occupational fraud risks. In the Report to the Nations, fraud perpetrators were analyzed by their department. While the most common department overall was operations (15% of cases), this area represents an even greater risk to insurance companies, with 24% of cases perpetrated by someone in the organization’s primary operations. Consequently, insurance companies need to ensure controls are in place for employees on the front line of operations. The most common schemes perpetrated by these individuals were corruption and billing, so companies should be vigilant for red flags of those schemes in their operations.

Two other behavioral red flags that were higher in the insurance industry than those found across other industries were 1) displaying financial difficulties and 2) displaying control issues or being unwilling to share duties. In the insurance industry, these warning signs were seen in 31% and 24% of cases, respectively, compared to 26% and 15% of cases in all industries. Financial difficulties can come from outside sources, such as a partner losing their job or unexpected emergency bills. However, if financial difficulties come from an employee being underpaid, they may be more likely to rationalize committing fraud as a way to make up for low wages. By staying aware of average market compensation for roles and making sure employees are paid fairly, companies can prevent employees from adopting that mentality. An unwillingness to share duties can be viewed favorably if the company culture celebrates an all-work mentality, but it can also be used to cover up fraud. If an employee never takes time off, they may be doing so because they’re afraid that if someone else takes over their duties temporarily, they’ll discover a fraud scheme the employee has been running.

Overall, the insurance industry is aware of the importance of internal anti-fraud controls and, in turn, has implemented them diligently. However, those in this industry still need to be cognizant of the departments and red flags associated with the highest fraud risks for them. Combatting fraud is never an exact science, but being aware of the risks unique to your industry will lead to better prevention of fraud before it ever occurs.