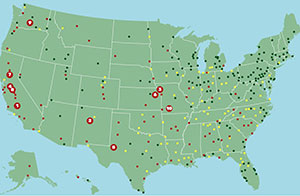 Like the national rate, New Mexico has also witnessed consecutive years of declining thefts, however the state tops the list with a theft rate near 448 vehicles per 100,000 people. Similarly, Bakersfield, California saw a decline from 2018 to 2019, however it moved from number three to the number one Metropolitan Statistical Area. California has the dubious distinction of placing 10 in the top 20 nationally.

The changing rankings of states and cities is a circumstance of dynamic studies. Nonetheless, this most recent study indicates most states and most locales are moving in a positive direction.

Eleven states did witness increases in theft rates. These states are:

The Hot Spots report examines vehicle theft data obtained from the National Crime Information Center for each of the nation’s Metropolitan Statistical Areas. These are designated by the Office of Management and Budget and often include municipalities other than the cities for which Metropolitan Statistical Areas are named. For example, Bakersfield, CA includes the entire county of Kern, not just the city of Bakersfield.

Vehicle manufacturers, law enforcement and legislatures have been responsive to vehicle theft over the years, and the results are evident. Vehicle owners must guard against complacency and remember to heed simple tips to safeguard their vehicles.