Hot Spots examines vehicle theft data obtained from the National Crime Information Center (NCIC) for each of the nation's MSAs. MSAs are designated by the Office of Management and Budget (OMB) and often include areas much larger than the cities for which they are named. For example, this year's number one spot, the Albuquerque, N.M. MSA, includes all thefts within the entire county of Bernalillo, not just the city of Albuquerque.

New to the top 10 this year, the metro areas of St. Joseph (No. 5) and Springfield, Mo. (No. 10). As a population-based survey, an area with a much smaller population and a moderate number of thefts can—and often does—have a higher theft rate than an area with a much more significant vehicle theft problem and a larger population to absorb it. Which is how St. Joseph, with 952 thefts, places 5th while Los Angeles, with 60,444 thefts places 33rd.

For 2017, the 10 MSAs with the highest vehicle theft rates were: (thefts in parentheses)

Each year the FBI releases preliminary Uniform Crime Report (UCR) data for the previous year's January–June time frame. When the preliminary 2017 crime data was released earlier this year, vehicle theft was up 4.1 percent across the nation. That increase is reflected in today's Hot Spots report and is expected to hold when the final UCR 2017 crime data is published in the fall. 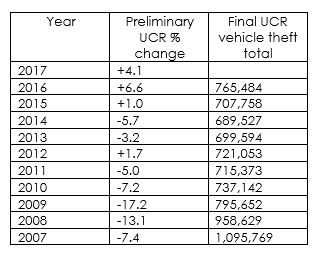 While the final result for 2017 is expected to be higher than 2016's number (although the rate of increase is decreasing), the vehicle theft environment across the country has improved significantly since the 1990s.

In a report published in October 2016, NICB found that for the years 2013 through 2015, a total of 147,434 vehicles were reported stolen with the keys left in them—57,096 in 2015 alone. With the debut of "smart keys" in 1997 and all of the improved anti-theft technology since, it is worthless if drivers continue to leave their keys in the car or leave their vehicles running, unattended, while they make a quick stop at a convenience store.

The full Hot Spots report is available at www.nicb.org. See the Hot Spots video here and a graphic here. 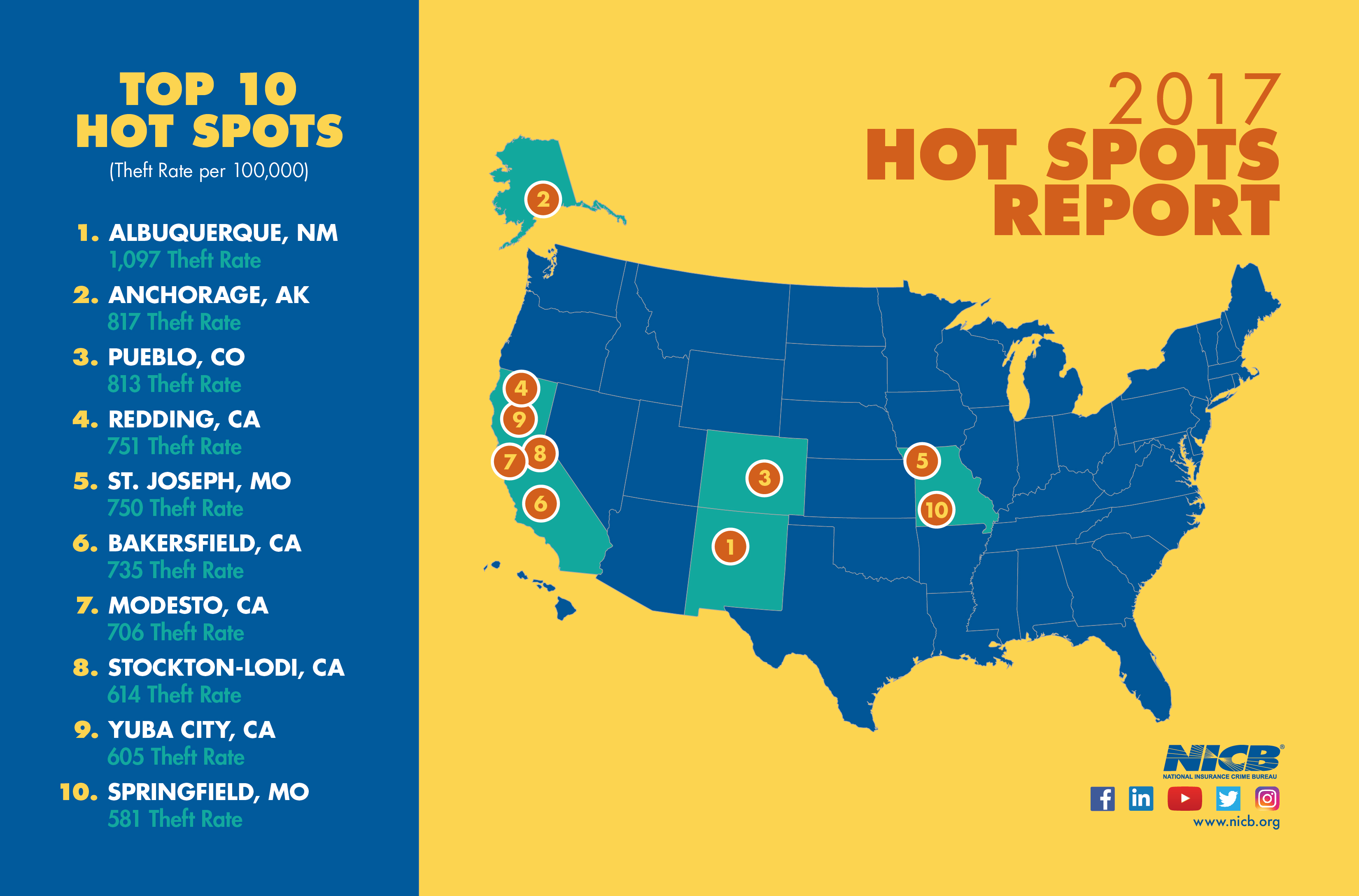 NICB recommends that drivers follow our four "layers of protection" to guard against vehicle theft:

Common Sense — The common sense approach to protection is the easiest and most cost-effective way to thwart would-be thieves. You should always:

Warning Device — The second layer of protection is a visible or audible device which alerts thieves that your vehicle is protected. Popular devices include:

Immobilizing Device — The third layer of protection is a device which prevents thieves from bypassing your ignition and hot-wiring the vehicle. Some electronic devices have computer chips in ignition keys. Other devices inhibit the flow of electricity or fuel to the engine until a hidden switch or button is activated. Some examples are:

Tracking Device — The final layer of protection is a tracking device which emits a signal to police or a monitoring station when the vehicle is stolen. Tracking devices are very effective in helping authorities recover stolen vehicles. Some systems employ "telematics" which combine GPS and wireless technologies to allow remote monitoring of a vehicle. If the vehicle is moved, the system will alert the owner and the vehicle can be tracked via computer.