Thieves are ripping catalytic converters from cars at an increasing rate. And as they do, theft victims are finding they need to fix an unexpected problem that costs upwards of several thousands of dollars.

A catalytic converter is a device that looks like a small muffler along the exhaust system. It is designed to convert the environmentally hazardous exhaust emitted by the engine and convert them into less harmful gasses. To do this, they use platinum, palladium, or rhodium. In recent years, however, the values of these precious metals have skyrocketed. As of December 2020, rhodium was valued at $14,500 per ounce, palladium at $2,336 per ounce, and platinum going for $1,061 per ounce. Typically, recyclers will pay $50 to $250 per catalytic converter.

The values of the precious metals contained inside catalytic converters today is staggering. As of this writing (March 2022), rhodium sits at $20,000 per ounce; palladium at $2,938 per ounce; and platinum at $1,128 per ounce according to kitco.com.

As the value of the precious metals remains high, so do the number of thefts of these devices. There is a clear connection between times of crisis, limited resources, and disruption of the supply chain that drives these thefts. 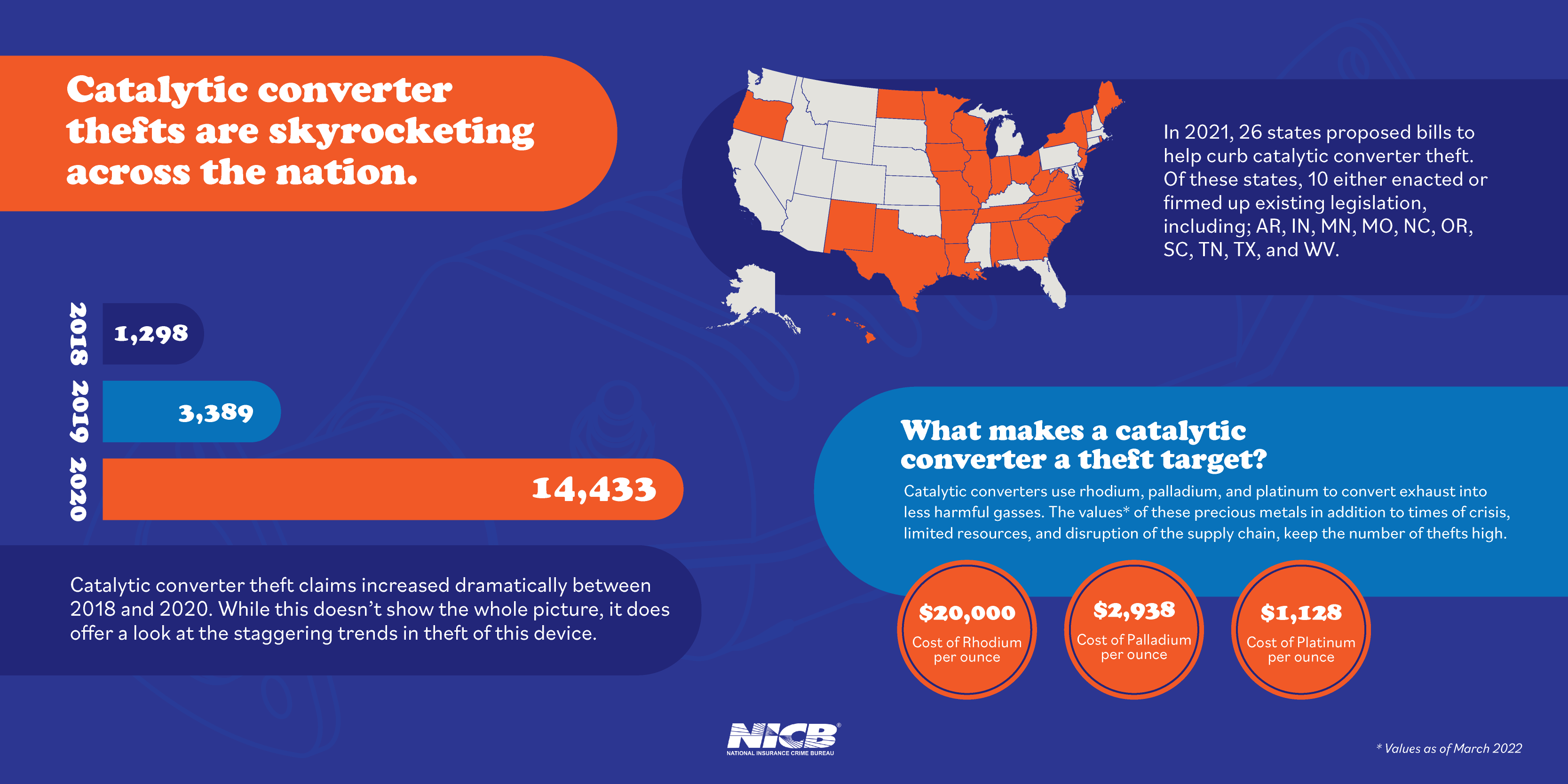 Across the country, there were 26 states that proposed bills in 2021 to help curb the theft of these devices. These states include:

Of these 10 states with legislation passed, the following laws are in place.

Six states had legislation pass the house or Senate but not yet enacted. These include Hawaii, Illinois, Maine, New Mexico, North Dakota, and Wisconsin.

As of the end of March 15, 2022, 35 states were looking at newly introduced legislation or carryover legislation from the previous session to address these crimes. Thus far in 2022, Alabama, Indiana, and South Dakota have passed legislation and these bills have been signed by the respective governors. For more about legislation in 2022, please follow this link.

Removing a catalytic converter takes only minutes using some basic, readily available battery-operated tools from a local hardware store. For the vehicle owner, it’s costly due to the loss of work, finding and paying for alternate transportation and then paying anywhere from $1,000 to $3,000 to get your car fixed.

To reduce the chance of having your catalytic converter stolen, The NICB recommends you:

In some cases, this theft is covered by insurance. The optional comprehensive portion of your insurance policy, the portion that covers damage caused to your car not caused by an accident, covers this kind of loss. However, the owner will be responsible for paying the deductible. If your deductible is $1,000 and the cost to repair the damage costs $1,000 or maybe a few hundred dollars more, drivers may not opt to file a claim. The NICB advises drivers to contact their insurer to report the theft and determine the best course of action.